Proceedings of the Sixth International Congress on Arsenic in the Environment (As2016), June 19-23, 2016, Stockholm, Sweden 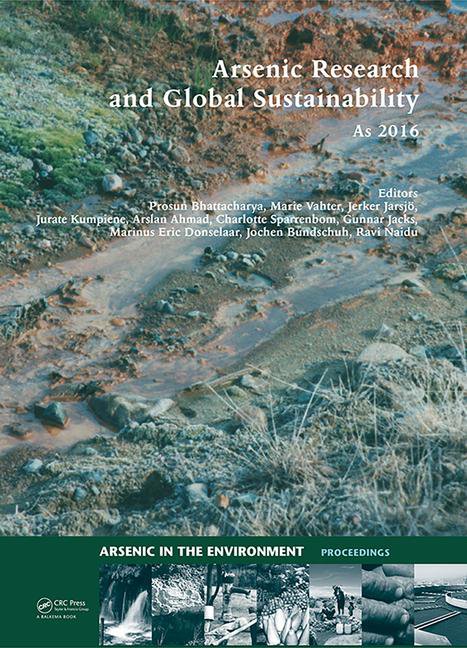 The Congress "Arsenic in the Environment" offers an international, multi- and interdisciplinary discussion platform for research and innovation aimed towards a holistic solution to the problem posed by the environmental toxin arsenic, with considerable societal impact. The congress has focused on cutting edge and breakthrough research in physical, chemical, toxicological, medical, agricultural and other specific issues on arsenic across a broader environmental realm. The Congress "Arsenic in the Environment" was first organized in Mexico City (As2006) followed by As2008 in Valencia, Spain, As2010 in Tainan, Taiwan, As2012 in Cairns, Australia and As2014 in Buenos Aires, Argentina.

The 6th International Congress As2016 was held June 19-23, 2016 in Stockholm, Sweden and was entitled Arsenic Research and Global Sustainability.

The Congress addressed the broader context of arsenic research along the following themes:

Long term exposure to low-to-medium levels of arsenic via contaminated food and drinking water can have a serious impact on human health and globally, more than 100 million people are at risk. Since the end of the 20th century, arsenic in drinking water (mainly groundwater) has emerged as a global health concern. In the past decade, the presence of arsenic in plant foods – especially rice – has gained increasing attention. In the Nordic countries in particular, the use of water-soluble inorganic arsenic chemicals (e.g. chromated copper arsenate, CCA) as wood preservatives and the mining of sulfidic ores have been flagged as health concern. The issue has been accentuated by discoveries of naturally occurring arsenic in groundwater, primarily in the private wells, in parts of the Fennoscandian Shield and in sedimentary formations, with potentially detrimental effects on public health. Sweden has been at the forefront of research on the health effects of arsenic, technological solutions for arsenic removal, and sustainable mitigation measures for developing countries. Hosting this Congress in Sweden was also relevant because historically Sweden has been one of the leading producer of As2O3 and its emission from the smelting industries in northern Sweden and has successfully implemented actions to reduce the industrial emissions of arsenic as well as minimizing the use of materials and products containing arsenic in since 1977. The Congress has gathered professionals involved in different segments of interdisciplinary research in an open forum, and strengthened relations between academia, industry, research laboratories, government agencies and the private sector to share an optimal atmosphere for exchange of knowledge, discoveries and discussions about the problem of arsenic in the environment and catalyze the knowledge generation and innovations at a policy context to achieve the goals for post 2015 Sustainable Development.