One Century of the Discovery of Arsenicosis in Latin America

Proceedings of the 5th International Congress on Arsenic in the Environment, May 11-16, 2014, Buenos Aires, Argentina 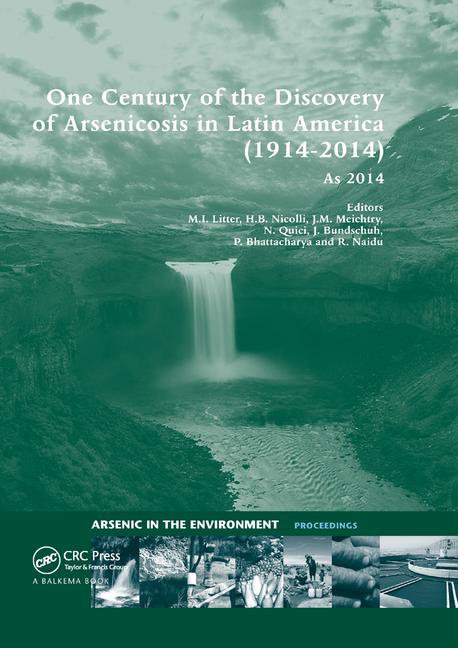 The Congress "Arsenic in the Environment" offers an international, multi- and interdisciplinary discussion platform for research aimed towards a holistic solution to the problem posed by the environmental toxin arsenic, with considerable societal impact. The congress has focused on cutting edge and breakthrough research in physical, chemical, toxicological, medical, agricultural and other specific issues on arsenic across a broader environmental realm. The Congress “Arsenic in the Environment” was first organized in Mexico City (As2006) followed by As2008 in Valencia, Spain, As2010 in Tainan, Taiwan and As2012 in Cairns, Australia. The 5th International Congress As2014 was held May 11-16, 2014 in Buenos Aires, Argentina and entitled One Century of the Discovery of Arsenicosis in Latin America (1914-2014).

Hosting this Congress in Argentina was especially relevant because 2014, marks 100 years since the discovery of the disease Hidroarsenicismo Crónico Regional Endémico (HACRE) or arsenicosis by Dr. Goyenechea and Dr. Ayerza in the city of Bell Ville, Province of Córdoba, Argentina. Dr. Ayerza was the first person to relate skin disorders to the consumption of groundwater with high concentrations of arsenic. It is estimated that more than 14 million people in Latin America are at risk, of whom nearly 4 million are exposed to drinking water with high arsenic concentration in Argentina, and further in Chile, El Salvador, Mexico, Nicaragua and Peru. A vast area of the Chaco-Pampean Plain in Argentina, mostly in the semi-arid regions, is affected not only by arsenic exposure from drinking water but also through other exposure pathways, e.g. through food and other dietary intake. The Congress has gathered professionals involved in different segments of interdisciplinary research in an open forum, and strengthens relations between academia, industry, research laboratories, government agencies and the private sector to share an optimal atmosphere for exchange of knowledge, discoveries and discussions about the problem of arsenic in the environment.